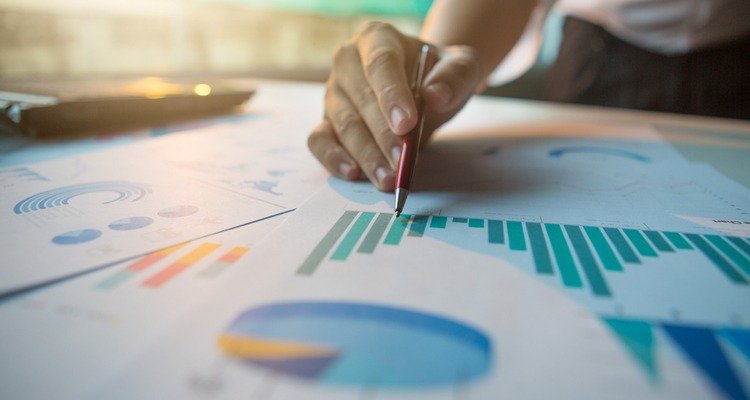 Co-authored by Matteo Carbone, director of the IOT Insurance Observatory and co-founder of Archimede Spac, and Adrian Jones, a #traditionalindustry guy and InsurTech investor who reads insurers’ financials on nights & weekends. We write in our personal capacity; our opinions are ours and should not be attributed to any employers, and we use only public data. This article also appears on Adrian’s LinkedIn page.

Our three US venture-backed InsurTech carriers have mo money, mo premium, and mo losses. Around the time their losses became notorious, there are some signs of improvement, but not enough to prove viable business models. It’s still early. No 2Pacalypse is imminent, as the start-ups have tons of cash. But forget about east coast / west coast feuds: it’s still InsurTechs against the world.

This is the fourth installment of our review of US InsurTech Start-up Financials. Here are the 2017 edition, the first quarter 2018 edition, which generated many social media discussions, and the second quarter 2018 edition. For more information on where our data come from and important disclaimers and limitations, see the 2017 edition. As we have said since the start, we think all three companies have solid management teams who will figure out a solid business, but it will take time.

As we have said before, it’s early days. Growth is rapid. But all three start-up carriers are a long way from profitability and need either to continue to raise prices substantially (and thus potentially churn customers), tighten underwriting (which could also materially affect growth), or improve operational aspects that drive losses such as claims performance.

In insurance, product-market fit is only demonstrated when selling a product that makes money.

Here is the summary of the 3Q18 details of the three venture-backed US insurers that we’ve been tracking. The fourth venture-backed insurer, Next Insurance, did not write premium in 3Q18. 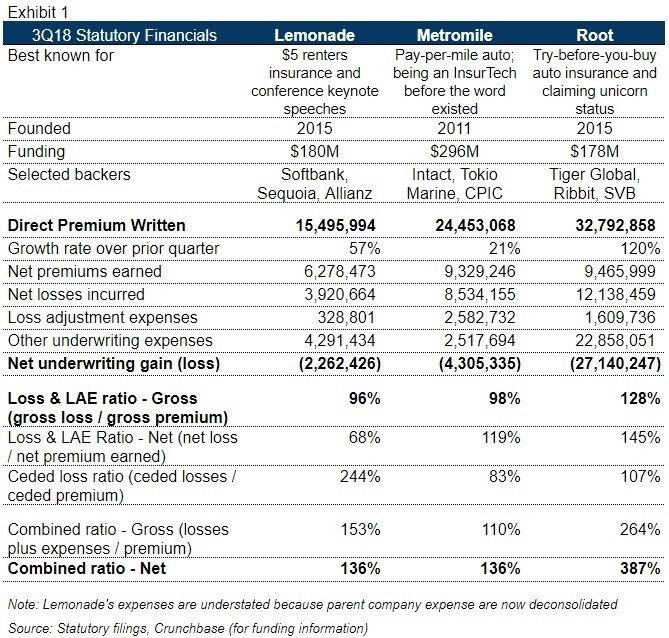 On expenses, it is important to note that Lemonade received permission from New York State to hide some expenses in an affiliated entity effective at the start of this year, so Lemonade’s expenses aren’t comparable to the others. (Lemonade’s CEO told us that the State of New York requested them to do so.) Root has followed suit and will now start to hide expenses in an affiliated agency, effective October 1, 2018.

Unfortunately, with less transparency, it is harder to verify whether the overall business model actually adds up. Lemonade, for example, makes a big deal about the power of an insurer built on a “digital substrate”. We’re inclined to agree, and we hope they’re right, but we won’t know from their statutory results whether a better expense ratio is really possible.

The third quarter’s “most improved” award goes to Lemonade, which grew premium by 57% over the prior quarter to $15.5M (perhaps helped by seasonal effects in the rental market) AND turned in a 96% gross & LAE loss ratio, its best ever. The company’s reserves developed slightly adversely in the quarter, with YTD unfavorable development standing at $254,000, modestly worse from $245,000 the prior quarter. 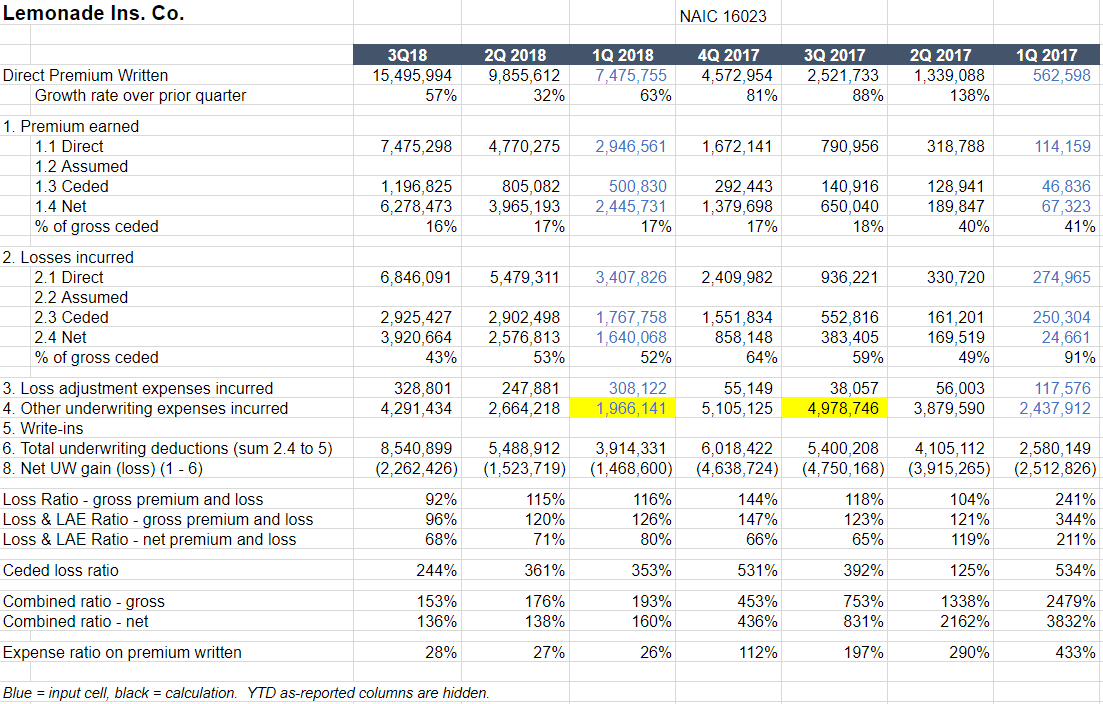 Lemonade has a way to go – their reinsurers continue to subsidize their loss ratio (but now paying «only» $2.44 of losses per dollar of premium), the average net loss & LAE ratio is still well above the 40% at which charities receive a giveback, and they are far from profitability. But re-underwriting and higher rates – that we discussed in our last post – may be paying off. There are other explanations too – shifting to cat-exposed risk, for example, lowers the loss ratio but raises the cost of capital.

The company has written $33M in the first 9 months of 2018, which is well behind some exponential expectations published last year. Management also says that they will take out 60 loss ratio points: «A similar progression in the year ahead will get us to where we need to be». Good luck. (Despite the good quarter.) Taking out loss ratio points gets harder for every point you get closer to the industry average. The breeziness of management’s comments makes us wonder how much focus will be placed on the hard spadework of loss ratio improvement vs. embarking on a glamorous European Grand Tour.

We have long taken issue with Lemonade’s definition of “transparency,” which (like many start-ups) is transparent only insofar as the company wishes to tell a story, which is just another form of marketing. (We are working on a longer article about ways start-ups bend numbers and welcome your ideas). We also agree with IBNR that a giveback at 1.6% of premium seems cynical. Middle-class insurance agents are some of the biggest charitable donors and sponsors in many towns, and it’s hard to see the social benefit in Lemonade’s spending the advertising budget enriching amoral tech bros at GAFA rather than sponsoring the town’s Little League uniforms as an agent might do. Even insurance veterans don’t seem to realize that all of Lemonade’s entities are for-profit. Don’t be fooled: B-Corps are still for-profit corporations. And railing against gun violence is easy, but social consciousness is messy in reality.

Metromile grew at a steady and respectable 21% from the prior quarter to $24.5M of gross premium but ran a 98% gross loss & LAE ratio (not improved from 2017). Among the three players, it has been the ant: slower growth and rather steady results. After seven years in business, the company is barely generating an underwriting profit and is showing little improvement. The company has been taking rate, but not enough as the actuaries say is needed. The company’s latest California indication, for example, is rates up 38%, but the company only took 15 points of rate, effective 7/1/2018, which will work through its book over the next couple of months.

Matteo recently published a discussion of why its PAYD (the pay-as-you-drive) approach confirms its niche nature. 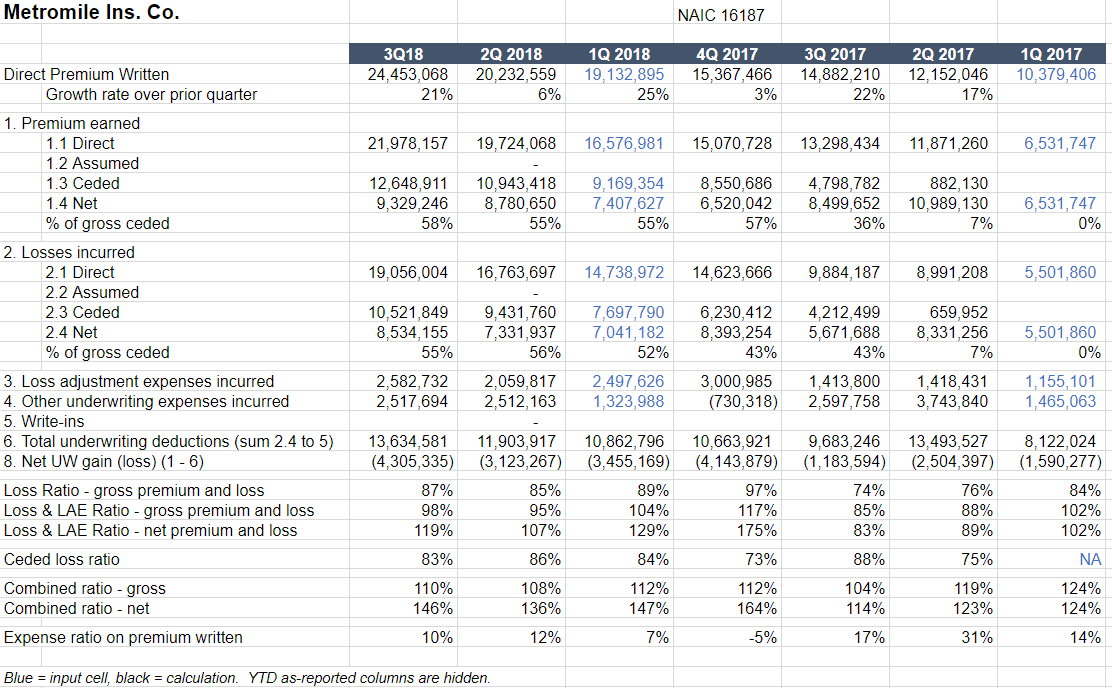 If Metromile is an ant, Root is a grasshopper. Root again grew extremely rapidly through its TBYB (Try-Before-You-Buy) mobile approach, as one probably would expect of a company with a $1 billion valuation (as we discussed in our previous article). Root doubled the volumes underwritten by Lemonade. But Root continues to struggle with rookie mistakes that drove losses – discussed more below. Root grew premium by 120% vs. the prior quarter to $33M for the third quarter but turned in 128% gross loss & LAE ratio – its worst of the year and the worst of the three US InsurTech carriers. 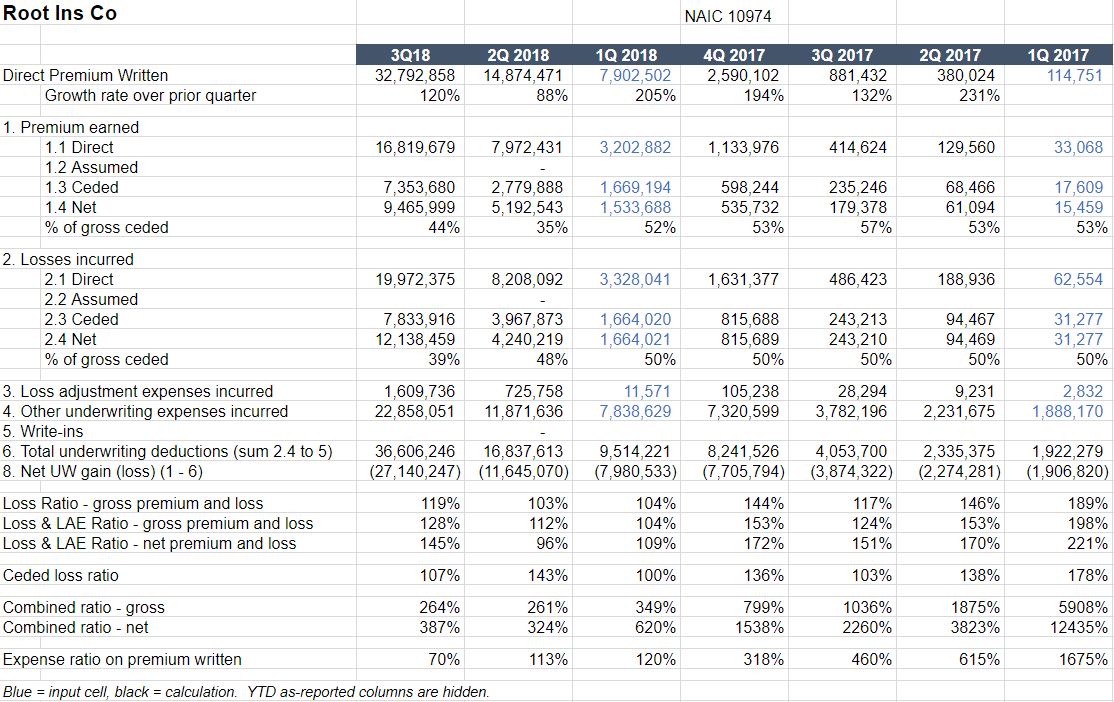 With the three carriers resuming rapid growth after a slow 2Q, the 2Q slowdown that we observed in our prior article may have been seasonal or a one-time coincidental slowdown.

We first pointed out in the prior quarter’s analysis that companies run/led by well-known underwriters were growing slowly but far more profitable than those with venture capital backing. That hasn’t changed.

Here are the four subsidiaries of big companies that are selling direct or have a claim on being an InsurTech. These companies often depend on parents for reinsurance and infrastructure, so we show mainly the gross figures. 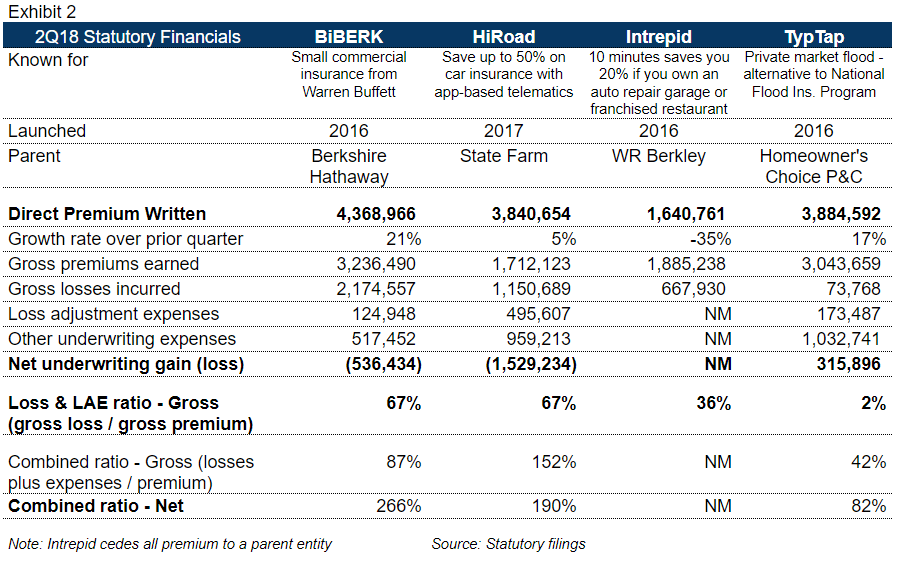 Gross or net – which matters?

One well-regarded venture capitalist challenged us on why gross premiums and loss ratio matter when net is what actually sticks to current investors. The difference between gross and net is reinsured premium and loss.

The gross loss ratio is provides an unbiased view of the profitability of the book of business, while the net loss ratio may benefit from savvy reinsurance buying, as in the case of Lemonade.

What matters most is for start-ups probably the higher of the two loss ratios. If reinsurance reduces the loss ratio, this is only sustainable over time if reinsurers make an adequate return. Reinsurers, like all businesses, tend to demand higher prices when customers lose them money, which in time makes the net loss ratio look more like the gross.

In the case of the two auto start-ups, they are paying reinsurers to take away their biggest losses, so this “cost of reinsurance” needs to be reflected, and the net numbers matter more.

At the November 30 plenary session of the US IoT Insurance Observatory, Denese Ross of DRC Consulting shared an in-depth 50-page review of Root’s filings, which total over 130,000 pages. Our opinions, based on her factual / non-opinion analysis, is that Root is experimenting aggressively, correcting some rookie mistakes, and is still underpricing some business.

The following is Matteo & Adrian’s interpretation and analysis: 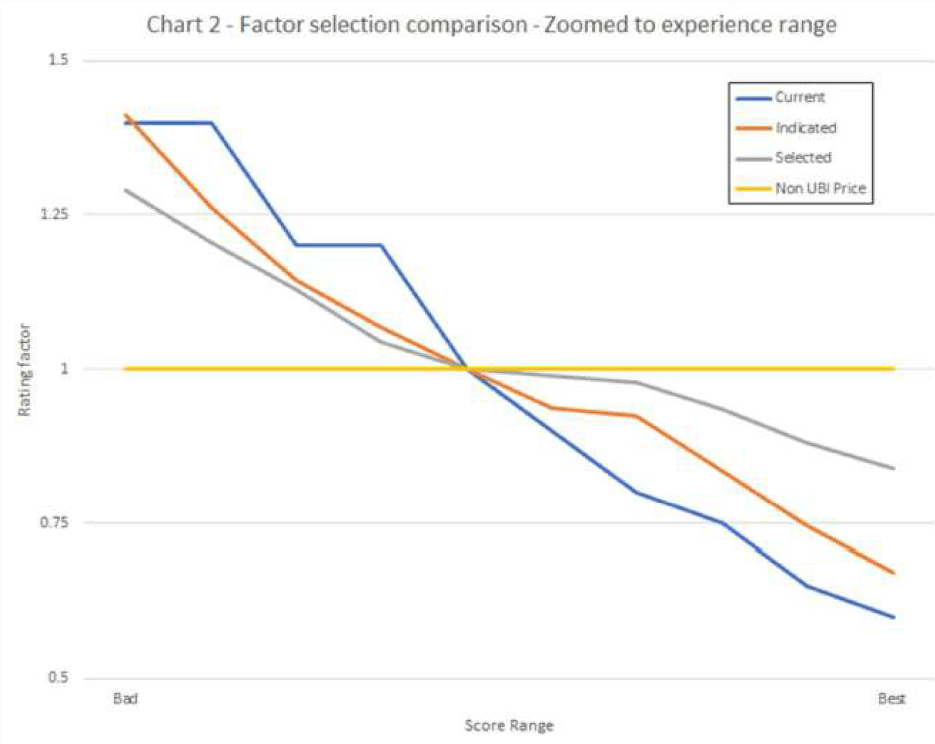 It will take time for these corrections Root has made to show through in results. And particularly on pricing, they may be too little. Thus, the unanswered question remains: is Root’s growth simply the result of selling something far too cheaply, or are they quietly experimenting their way to becoming the next Progressive?

Can a start-up compete with Progressive and Geico?

The most common refrain of start-ups is that insurance is broken and their solution will fix it. Oui, c’est vrai. But two companies have their act together more than almost any other insurers: Geico and Progressive, the #2 and #3 auto insurers in the US. Geico is famous for its lean expenses, while Progressive runs a loss ratio about 6 points below the industry average of 69%.

It wasn’t always this way. Back in 1996, Progressive was #7 and Geico was #9. There are few other examples in insurance of companies so steadily and regularly gaining market share across decades. In our first article, we showed how start-ups historically have only won where incumbents leave the door open. Progressive and Geico are not leaving the door open, at least in personal auto as a stand-alone line. Progressive in particular has been quite experimental throughout its life, pioneering telematics in the US and experimenting with various ways of paying for auto insurance and using telematics, as some start-ups are now doing, but with none of Progressive’s advantages.

So why do start-ups try to compete with such well-run companies? We think there are several belief (or hopes):

This analysis isn’t to suggest that it’s impossible for a start-up to win in auto insurance, but that the moat around Geico and Progressive in personal auto is wide and deep.

The annual figures that are published in March contain a wealth of additional information. To be notified when these numbers are available, please follow the authors on LinkedIn.

We’ve been busy publishing, in particular by guest-editing the current edition of Carrier Management. Here is what we published there. Apologies that some are behind the paywall.

What do you think?